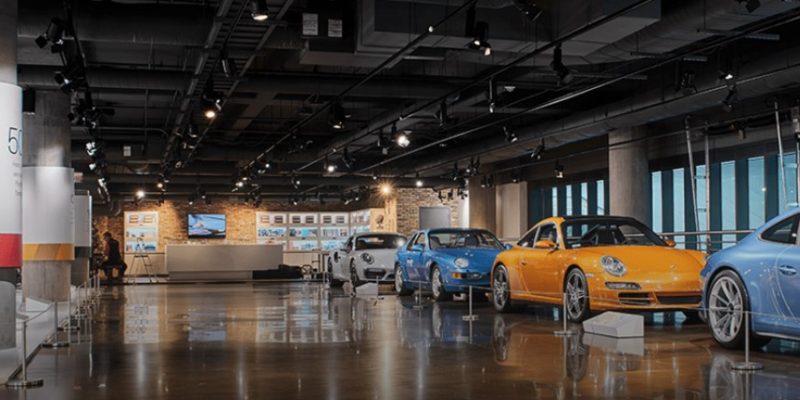 Step into a gallery of vibrant Porsche color.​

Every Porsche is a canvas in motion. And with this new exhibition, at the Porsche Experience Center Atlanta, visitors have the chance to step into a world of vivid custom color like never before.

Step inside the Colors of Porsche exhibit in the PEC Atlanta’s Heritage Gallery and take a closeup look at 10 historically-significant models in a kaleidoscopic area of custom colors. Take a sneak peak at the models featured in the collection below.

The 911 GT2 RS. Best known as the lap speed record holder on the fabled Nordschleife of the Nürburgring. As well as being the fastest street-legal Porsche model to date. This 2018, displayed here in Ice Green Metallic, presents minty green in low light and silver when in motion under the sun.

Fun fact: this vehicle’s hood was signed by Hurley Haywood.

Close to a quarter of Porsche models sold in the US are delivered in California. This 1993 968 in Tahoe Blue pays fitting tribute to the state’s most famous lake. When fully exposed to sunlight, the paint’s turqouise qualities come through. In blue light, it more closely reflects royal blue.

The 911 GT3 with Touring Package drops some of the track-focused features of its bretheren, giving it a more low-profile look. Which is offset on this particular 2019 model by its stunning Azurro California Blue finish, made popular on many early 356 models.

Fun fact: there is a Club Couple at the PEC Atlanta finished in the same color, one of only 50 ever produced.

This 2017 911 Turbo S Cabriolet sports a highly rare Nardo Grey paint finish. Its opaque nature gives it a milky texture, turning what seem to be a neutral choice into a stunningly bespoke look.

Fun fact: Nardo Grey was originally an Audi color in its performance RS line that the owner loved it so much he selected it through Paint to Sample.

Introduced in 2016, the 911 R was deemed “the purist’s Porsche” for its manual transmission, naturally-aspirated 500-hp, and elegant looks. Only 991 were manufactured. Its owner chose Fire Red in tribute to the model driven at the 1967 Circuito de Muguello, which gave the original 911 R its racing debut.

This 1988 911 Carrera originally looked quite different. It was several inches lower to the ground, only had two headlights, and it wasn’t dripping in Rubystar paint. That all changed when it was converted for off-road usage by the Keen Project. In addition to being a professional racer, Leh Keen uses the project to customize classic 911 models to rally specs, bringing air-cooled performance off-road . Rubystar (aka Rubystone Red) was introduced in the early nineties for Type 964 models, and was recently revived as a Paint to Sample option for the Taycan.

Fun fact: this “Safari” model is the Keen Project’s “Project 11.”

Fun fact: this extremely rare color was launched through the Exclusive Manufaktur in the early 2000s.

Gulf Orange and Signal Orange may have more name recognition, but for a color that has only been available through the Paint to Sample program, Pastel Orange has a cult following among GT enthusiasts. This 2011 GT3 RS 4.0 model was part of the first special edition production of GTs, with more power than the typical 3.8-liter RS.

Visit the Heritage Gallery and see the exhibit for yourself. Book your visit to the Porsche Experience Center Atlanta here.