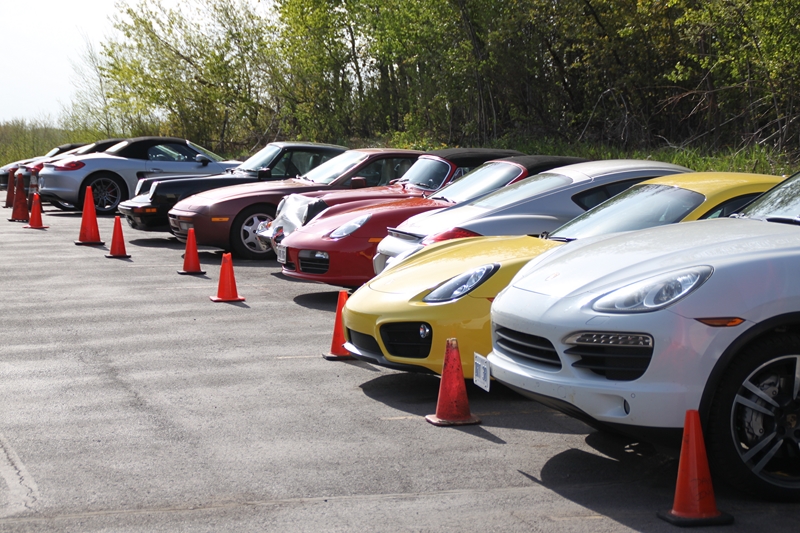 Our friends from Madison (Edgerton, Wisconsin) asked us last October if we would be interested in joining the Central Wisconsin Region‘s Spring Waterfalls Tour. The tour’s first stop was scheduled in Duluth, only 6.5h south east from us, so we signed up.
May 18 came around and were on our way. To make it even more special, both of our boys where home for the long weekend and joined us on the trip.

We arrived in Duluth with our Cayenne S in the late afternoon, the weather had improved a little bit, but the sun decided not to join the tour. By 5pm the group from the south arrived at the hotel and after everyone freshened up 15 Porsches made their way downtown to Pickwick for Dinner.

Our host, Laura Prellwitz, welcomed all members and after dinner she handed out a Porsche quiz to test the group on their Porsche knowledge.
Saturday morning the group got ready to head back to Wisconsin and explore several State Parks. The Adventure started at the Pattison State Park , the Manitou Falls were impressive. Next stop was at the Amnicon State Park.

The roads between the parks are picturesque and the speed was within the rules of the road. Now it was time for some lunch and there was no better way than to stop at a Diner on the top 100 List of “Things to visit in Wisconsin”. We had never eaten in an authentic Diner, and the Delta Diner did not disappoint. One more Park was on the schedule, Copper Falls. In the afternoon the weather thought that a couple rain drops would be a great idea, but reconsidered after a couple swipes with the windshield wiper. The final stop of the day brought us into Ironwood, Michigan.

Dinner was served at the Maplewood Steak House and for the second after dinner we were given a quiz. This time it was about the parks and communities local to them. Many members struggled  to replicate their success from the day before.  After returning to the hotel members mingled in the lobby and shared various stories for a couple more hours.

On Sunday morning we had breakfast and most of the group then made their way home. Jean and Gregg  joined us for an extra day as we plotted our way to Minneapolis and we found some nice back roads.
First stop was at the Surly Brewing Company for a lunch and some craft beers. Being in Minni and not visiting Mall of America would almost be criminal. The mall wore us down a bit so we went for cocktails in the afternoon in a hip distillery for a pick up. We for sure got out dose of city driving in for the year. Dinner was at a Guy Fieri ‘s, Diners, Drive-Ins and Dives tip, the Bryan Lake Bowl and Theatre in the Lyn-Lake District.

What a nice way to spend the May Long Weekend, if you are not into fishing. We had a great time together with our PCA family and new friendships were formed.