The rest of us may be focused on the road-going 2022 Porsche 911 GT3, but there’s an even more intense version that’s just now making it to our shores. The 2021 Porsche 911 GT3 Cup is the first model that’ll be campaigned in North America as part of the Carrera Cup, with first deliveries beginning this week.

It first came to our attention through a series of tweets showing the cars arriving from Germany, neatly arrange and glistening in their unadorned silver beauty. Those cars are now making their way to teams, which means we’re starting to see videos of what these over-the-top machines look like in person. In one from 311RS Motorsport on YouTube, we see racers Leh Keen (yes, that Leh Keen) and Ryan Gates looking over the cars they’ll campaign in the inaugural North American season of the Carrera cup.

They point out the cross-shaped headlights that reference the old taped-up lenses of vintage race cars, along with less obvious details like how the supports for the wing are also designed to hold the rear decklid while you work on the engine. Brake bias can now be easily adjusted by a knob inside, while the digital instrument cluster provides an amount of information. Forged carbon parts also reduce overall weight, with overall dry weight coming in at just under 2800 lbs. It’s got 510 hp to move that mass around, so we’d expect the 911 GT3 Cup to feel pretty brisk. 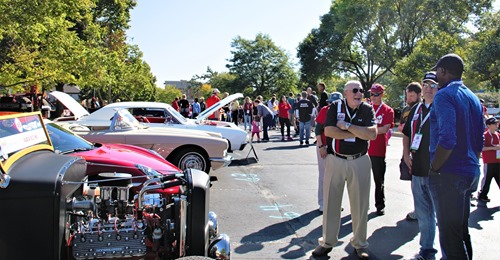 We are pleased to announce that Cars Curing Kids is now the official charity for our Central Wisconsin Region. A non-profit 501(c)3 […]

Unfortunately, only four members showed up for the August meeting. Since a quorum was not met there was no official meeting. However, […]

VISIT ALL OUR SPONSORS – THANK YOU